Simeon was the son of a shepherd.He was born at Sis, now the Turkish town of Kozan in Adana Province. Sis was in the Roman province of Cilicia, and after the separation of the Roman Empire in 395 it became part of the Eastern Roman Empire and Christianity grew quickly there.
According to Theodoret, Bishop of Cyrrhus, Simeon developed a zeal for Christianity at the age of 13, following a reading of the Beatitudes. He entered a monastery before the age of 16. From the first, he gave himself up to the practice of an austerity so extreme and to all appearance so extravagant, that his brethren judged him to be unsuited to any form of community life. Simeon was requested to leave the monastery.
He then shut himself up for one and a half years in a hut, where he passed the whole of Lent without eating or drinking. When he emerged from the hut, his achievement was hailed as a miracle.He later took to standing continually upright so long as his limbs would sustain him.
After one and a half years in his hut, Simeon sought a rocky eminence on the slopes of what is now the Sheik Barakat Mountain and compelled himself to remain a prisoner within a narrow space, less than 20 meters in diameter. But crowds of pilgrims invaded the area to seek him out, asking his counsel or his prayers, and leaving him insufficient time for his own devotions. This at last led him to adopt a new way of life.

In order to get away from the ever increasing number of people who frequently came to him for prayers and advice, leaving him little if any time for his private austerities, Simeon discovered a pillar which had survived amongst ruins, formed a small platform at the top, and upon this determined to live out his life. It has been stated that, as he seemed to be unable to avoid escaping the world horizontally, he may have thought it an attempt to try to escape it vertically. For sustenance small boys from the village would climb up the pillar and pass him small parcels of flat bread and goats’ milk.
When the monastic Elders living in the desert heard about Simeon, who had chosen a new and strange form of asceticism, they wanted to test him to determine whether his extreme feats were founded in humility or pride. They decided to tell Simeon under obedience to come down from the pillar. They decided that if he disobeyed they would forcibly drag him to the ground, but if he was willing to submit, they were to leave him on his pillar. St Simeon displayed complete obedience and humility, and the monks told him to stay where he was.
At first the pillar was little more than nine feet high, but it was subsequently replaced by others, the last in the series being apparently over fifty feet from the ground. At the top of the pillar was a platform, with a baluster, which is believed to have been about one square meter.
Edward Gibbon in his History of the Decline and Fall of the Roman Empire describes Simeon’s existence as follows:
In this last and lofty station, the Syrian Anachoret resisted the heat of thirty summers, and the cold of as many winters. Habit and exercise instructed him to maintain his dangerous situation without fear or giddiness, and successively to assume the different postures of devotion. He sometimes prayed in an erect attitude, with his outstretched arms in the figure of a cross, but his most familiar practice was that of bending his meagre skeleton from the forehead to the feet; and a curious spectator, after numbering twelve hundred and forty-four repetitions, at length desisted from the endless account. The progress of an ulcer in his thigh might shorten, but it could not disturb, this celestial life; and the patient Hermit expired, without descending from his column.
Even on the highest of his columns, Simeon was not withdrawn from the world. If anything, the new pillar drew even more people, not only the pilgrims who had come earlier but now sightseers as well. Simeon made himself available to these visitors every afternoon. By means of a ladder, visitors were able to ascend, and it is known that he wrote letters, the text of some of which have survived to this day, that he instructed disciples, and that he also delivered addresses to those assembled beneath, preaching especially against profanity and usury. In contrast to the extreme austerity that he demanded of himself, his preaching conveyed temperance and compassion, and was marked with common sense and freedom from fanaticism.
Much of Simeon’s public ministry, like that of other Syrian ascetics, can be seen as socially cohesive in the context of the Roman East. In the face of the withdrawal of wealthy landowners to the large cities, holy men such as Simeon acted as impartial and necessary patrons and arbiters in disputes between peasant farmers and within the smaller towns.

Reports of Simeon reached the church hierarchy and the imperial court. The Emperor Theodosius II and his wife Aelia Eudocia greatly respected the saint and listened to his counsels, while the Emperor Leo I paid respectful attention to a letter he sent in favour of the Council of Chalcedon. Simeon is also said to have corresponded with St Genevieve of Paris.
Patriarch Domninos II (441-448) of Antioch visited the monk, celebrated Divine Liturgy on the pillar. Once when he was ill, Theodosius sent three bishops to beg him to come down and allow himself to be attended by physicians, but Simeon preferred to leave his cure in the hands of God, and before long he recovered.
A double wall was raised around him to keep the crowd of people from coming too close and disturbing his prayerful concentration. Women, in general, were not permitted beyond the wall, not even his own mother, reportedly telling her, “If we are worthy, we shall see one another in the life to come.” She submitted to this, remaining in the area, and embraced the monastic life of silence and prayer. When she died, Simeon asked that her coffin be brought to him. He reverently bade farewell to his dead mother.
Simeon spent 37 years upon the pillar.He died on 2 September 459. A disciple found his body stooped over in prayer. The Patriarch of Antioch, Martyrios performed the funeral of the monk before a huge throng of clergy and people. They buried him not far from the pillar.

Simeon inspired many imitators, and, for the next century, ascetics living on pillars, stylites, were a common sight throughout the Christian Levant.
He is commemorated as a saint in the Coptic Orthodox Church, where his feast is on 29 Pashons. He is commemorated 1 September by the Eastern Orthodox and Eastern Catholic Churches, and 5 January in theRoman Catholic Church.
A contest arose between Antioch and Constantinople for the possession of Simeon’s remains. The preference was given to Antioch, and the greater part of his relics were left there as a protection to the unwalled city.
The ruins of the vast edifice erected in his honour and known in Arabic as the Qalaat Semaan (“the Fortress of Simeon”) can still be seen. They are located about 30 km northwest of Aleppo and consist of four basilicas built out from an octagonal court towards the four points of the compass to form a large cross. 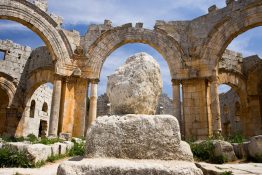 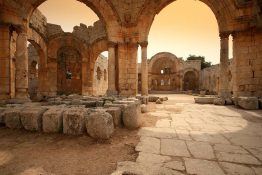 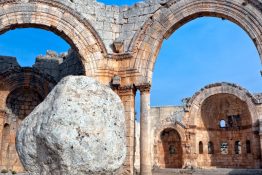 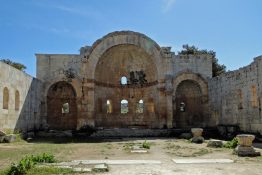 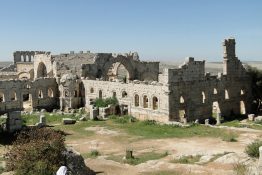 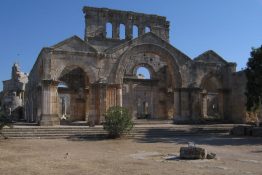